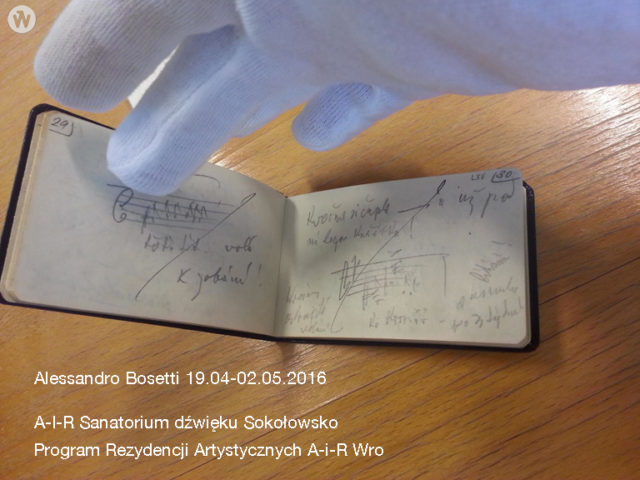 A-I-R Sanatorium of Sound 2016 is a residency program for composers, improvisers and sound artists, creating a platform for contemporary music and broadly understood sound art. One of the program tasks is to support new, creative curatorial practices relating to the topic of sound and music, as well as the search for meaning in the intersection of art and technology.

The program is run in within the Artist-in-Residence Programme A-i-R Wro, part of European Capital of Culture Wroclaw 2016. The invited artists will take part in a two-week residencies in Sokołowsko, which effects (such as compositions, sound installations or theoretical works) will be presented also at the third edition of the Sanatorium of Sound Festival, held in Sokołowsko on 12-14th August 2016.

Artist-in-Residence Programme A-i-R Wro is co-financed from the funds of the Ministry of Culture and National Heritage of Poland.

The aim of the residence will be to expand Bosetti’s radio opera “The Notebooks”.  At the moment it functions as a work-in-progress and in its purely sound form it has won the Ars Acustica 2015 contest. The starting point of Bosetti’s project are the notation of an outstanding Czech composer Leoš Janáček found in Brno. In times when it wasn’t possible to record the surrounding sound, he used a pre-phonographic way of registering the sound – the music notation. He didn’t use it, as it was commonly done, to register an imagined music composition, but to note the sounds being in fact composed in  reality.  In this case his notation can be regarded as one of a kind “pre-recording recording”. While conducting his research in Brno, Alessandro Bosetti has chosen a couple dozen Leoš Janáček’s notes and decided to use them as a music score. In his project he aims to recreate the sounds the were present in the Czech’s composer life. In his interpretations he enters a dispute with Leoš Janáček’s notations and creates a jewel case-like construction. The aim of the residence in Sokołowsko will be a composition of a new sound version of his opera and creating its visual counterpart reflecting Janáček’s notation. The result will therefore be an audio-video piece reflecting the notes of the Czech composer.

Alessandro Bosetti (1973) is a composer, performer and sound artist. Most of his work relates to the issue of musicality of the spoken language and sound aspects of verbal communication, especially misunderstandings and problems of translation. A significant part of his works are compositions for voice and electronics blurring the differences between them. He composed for such important institutions as the GRM in Paris, Roulette and The Stone in New York City, Cafe OTO in London, WDR Studio-akustische-Kunst in Cologne and Deutschland Radio Kultur in Berlin and the other in Europe, Asia and the United States. Honored with such awards as Phonurgia Nova (2012) for his composition “636” IDAF (2013) for “Mirror Mask” Ars Acustica (2015) for “The Notebooks”. Cooperates with, among others, Tony Buck, Chris Abrahams (The Necks ), Jennifer Walshe. As a composer, is also working with bands like Kammerenseble Die Neue Musik and Maulwerker in Berlin or Stuttgart Neue Vokalsolisten.

Michał Libera (1979): sociologist working in sound and music since 2003, now mainly involved in producing and staging sound essays and other experimental forms of radio art and opera which brought him to collaborate with Martin Küchen, Ralf Meinz, Rinus van Alebeek, Alessandro Facchini, Joanna Halszka Sokołowska, Komuna// Warszawa and others. Libera is a producer of conceptual pop label Populista dedicated to mis- and over- interpretation of music as well as series of reinterpretations of music from Polish Radio Experimental Studio (Bôłt Records). He curates various concerts, festivals and anti-festivals, music programs for exhibitons and received honorary mention at 13th Venice Arhcitecture Biennale. Other regular collaborators include National Art Gallery Zachęta, Centre for Contemporary Art in Warsaw, Polish National Museum (Królikarnia), Galerie West in The Hague, Satelita in Berlin. His essays on music and listening „Doskonale zwyczajna rzeczywistość” were published by Krytyka Polityczna.